If a Sunday morning rolls around and I don’t have a roll of cinnamon rolls in the fridge I end up scrounging around the kitchen to find another way to get that fix. I’ve created cinnamon rolls from crescent rolls before, and that’s always a good solution, but I don’t buy crescent dough very often anymore. I’ve done cinnamon roll oatmeal which was fantastic; I should probably do it again and photograph it to generate a blog post.

I’ve seen these cinnamon roll pancakes floating around Pinterest and never thought I’d have the time to whip them up on a Sunday morning before church. Surprisingly, I was wrong! These are actually quite quick to make and so worth it. I did opt out of the cream cheese glaze because I didn’t have cream cheese (shocking!). The photos of these pancakes are pretty sad, so I will absolutely need a re-do.

You can use your favorite pancake recipe or a store bought mix. The magic is in the swirl. If desired, serve with a cream cheese glaze (4 tbsp butter, 2 oz cream cheese, 1 1/4 C powdered sugar, 1 tsp vanilla extract). I didn’t even use syrup.

*This recipe is adapted from Holly at http://life-in-the-lofthouse.com/cinnamon-roll-pancakes/* 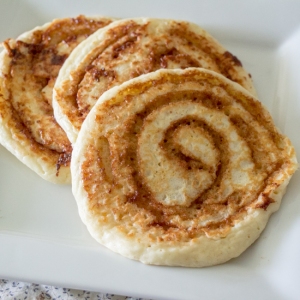