I hate to say it, but the TV is on almost all day in my house. I am one of those people that needs to have the noise of the TV to stay sane, so I’ve adjusted the viewing to fit with those kid’s shows that I “approve” of and that my son likes.

My son will never sit still to actually watch a full episode of anything (unless he’s sick) but for those instances when he looks at the TV I want to make sure it’s toddler appropriate and there won’t be a commercial for the R-rated next horror movie. 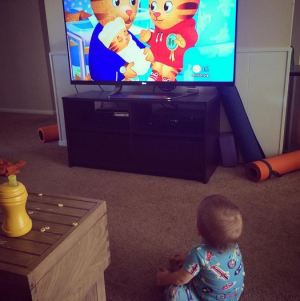 Daniel Tiger’s Neighborhood: While I know most of the situations in this show are geared towards older kids, 3-4, it does a great job in explaining different social situations and how to deal with different emotions. There’s even an episode when Daniel becomes a big brother that I have recorded and saved to be re-watched 8 weeks from now. My 14 month old will occasionally sit still to watch 5-10 minutes at a time – he likes the music and colors. And of course, the fact that Daniel is a tiger is a big hit in this Auburn household.

Peg + Cat: Okay, I must admit that I like Peg + Cat more than my son does. A glance at the TV will not captivate him with this show (and that’s okay!), but it’s often on during lunch and he’ll pay attention while he eats. Peg + Cat does a great job in teaching math skills, and the engineer in me loves that the cartoon is drawn on engineering paper with equations all along the background. There is always counting, sometimes by twos, shapes, and basic algebra. There are even references to history, science, and literature.

Thomas and Friends: And now for a show that my son likes better than I do. I know my brother and I grew up with Thomas the Tank Engine but I’m not fully convinced I like it. My son became captivated with the trains and the theme song, so I left it on. Each episode focuses on a different character who makes poor decisions. I’m not thrilled with the attitudes of these trains, but the episodes do explain what the character did wrong and the character always apologizes and fixes their mistakes. Thomas and Friends might become more applicable in Elementary School.

The Cat in the Hat Knows a Lot About That: I was introduced to this show a few years ago babysitting. Originally, The Cat in the Hat started off as being one that my son would shrug off, but now that he recognizes the “thing-a-ma-jigger” song he smiles and dances along. The main subject of this show is science; teaching viewers mainly about animals and weather. 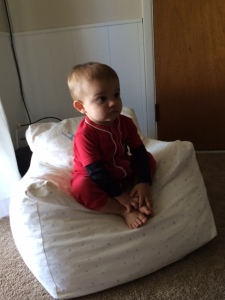 Team Umizoomi: Here is another math centered show, and this one is more captivating for my little man. (It’s much more colorful than Peg + Cat is.) There are usually a couple of episodes that come on right before Dad returns home from work and turning Team Umizoomi on can help keep the early evening fussiness at bay. Every episode of Team Umizoomi involves counting, patterns, and shapes. The end of every episode encourages the kids to get up and move (not something my son needs help with!) by doing a celebratory “dance” called “The Crazy Shake.”

Wallykazam: I have saved the best for last. Wallykazam is not only my son’s favorite show, but my husband and I absolutely love it, too. Honestly, we’ll finish an episode long after our 14 month old has lost interest. Wallykazam teaches spelling and vocabulary by way of magic in a fantasy land. The characters (troll, goblin, dragon, giant, ogre, etc) are absolutely adorable (although my brother’s fiance will object because they all have bad teeth)! We record Wallykazam because it’s not on every day and will often watch an episode an hour before bed time to start calming down our ball-full-of-energy. At seeing Wally and Norville on the DVR list my son will point at the TV very excitedly and make his “I want” whimper.