My mom has been dying to do the “touristy” things ever since we moved out to SoCal one year ago.

The idea of driving around to look at famous people’s homes on a giant bus doesn’t appeal to me too much, but I’ll do it with her eventually. Before we leave this duty station anyway.

Update: I’ve been corrected. Mom wants to do a Studio Tour, not a bus tour. (Phew!) I don’t think kids are allowed on studio tours so that will be logistically more challenging to arrange.

Seeing the Hollywood Stars might be kinda cool, if it weren’t just so darn crowded, and from what I hear, dirty. But again, I’ll make that trek with her. Maybe the next visit, Mom.

Seeing the Hollywood sign was a little more doable and an excursion I was simply waiting for the right time to do it. I did a tiny bit of research and asked a couple of friends if they’d gone with children.

So when my mom was here last week, off we went to Griffith Observatory to catch a glimpse of the iconic Hollywood sign.

Finding information about the sign was easy. A quick browser search came up with this incredible website where we found great information regarding trail options based on your difficulty desire.

Reading that the trails run through snake territory, I knew that I wanted to be in long pants (in addition to closed toed shoes). My mind had me picturing narrow trails with a lot of foliage where snakes could take shelter.

Maybe the more strenuous paths would be that way, but the easy path we took at the Charlie Turner Trailhead was fairly smooth and quite wide. Strollers would have been easy enough to use on the path, too. A bit of a push uphill, but definitely doable. 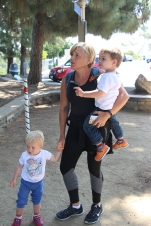 There’s zero shade on the trails so be sure to bring plenty of sunscreen, water, and hats.

But wait, Lauren, your kids aren’t wearing hats in any of these pictures!

You’re right, they’re not. Both of my boys have hated hats since the beginning of their time. We swore when Treat came around we would get him to like hats being a winter baby in Ohio. No such luck. There might be hope in our future though! We gave them baseball caps at the LA Galaxy game last weekend and Firecracker liked it and Treat was iffy on it, but it did last longer than any other thing that’d been placed on his head in the previous 17 months!

I am quite glad I took the opportunity to check out the Hollywood sign this spring. I couldn’t imagine doing this hike in the summer. At least not with little children. I immediately regretted putting them in pants. 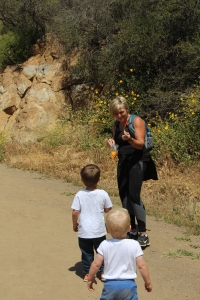 We spent about two hours on the trail. We didn’t get too far in that first hour going at the pace of a 17 month old, but we did make it to a great viewing area before turning around.

The kids were a little bit all over the place. Want to know how to get kids to keep moving when all they want to do is play in the dirt? Goldfish!

We had packed a lunch and enjoyed it at the Berlin Forest. An area with a few trees providing shade and a couple of picnic tables and benches. As it’s near the start of the trail, we left the “picnic basket” in the car and it was simple enough for my mom to get some “extra steps” down to the car to bring up our lunch (and the stroller!).

Mentioning the car brings me to my next point.

The website I referenced earlier stated that parking at the observatory was free. Maybe it was at one point, but it isn’t still. It costs $4/hr and you have to pre-pay.

There’s plenty of free parking available further down the mountain, but as we really weren’t sure where we were going we opted for convenience. With the kids, it was definitely a good idea!

The parking lot as a splendid view of the sign, so if that’s all you’re really after, just do a drive by. (See the first photo of this post.) 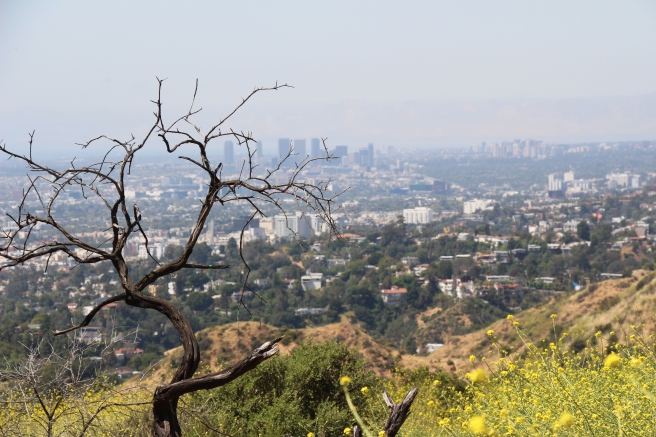