I used to not like soup. Really it’s the method of eating soup that I have a problem with. I have a condition. I do NOT like my lips touching my silverware. Just one of my many quirks (another is that I absolutely hate water on my face – I am constantly wiping the water droplets off my face in the shower – seriously, it’s a problem)!

It wasn’t until my discovery of Panera’s Broccoli Cheddar Soup that I really gave soup a chance – but then again I ate it with practically an entire loaf of bread instead of a spoon. I’m much better with eating soups now and manage to eat them with a spoon, although I’ve found a way around my lips touching the utensil.

When we moved to Ohio I ended up making a lot of soups. Almost a soup a month! There’s just something about those cold, grey days. Soups are also a great way to introduce lots of flavor to my little man and so far he’s liked every soup he’s tried (for the record, that’s a grand total of two).

I decided to omit the heavy cream from the recipe and added in a little extra beef broth. Which is surprising. I typically put cream in everything if the option exists. My mom was visiting, though, and in an effort to lighten up the soup I kept an open mind and tasted the soup before adding the cream. We all decided it wasn’t necessary. In fact, I think it would’ve muddled the sausage, potatoes, and bacon.

*This recipe is adapted from Aimee at http://www.foodfanatic.com/2014/05/zuppa-toscana-italian-soups-on/* 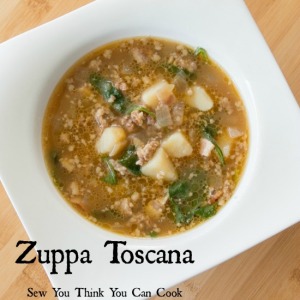