When I made the baked beans for yesterday’s #SundaySupper post I needed the perfect entree to serve them alongside. I went deep into the archives (over four years ago) to a favorite I used to make often back in the days before the blog. This pork tenderloin is inspired by something Bobby Flay made on his Food Network show Barbecue Addiction.

On the show Bobby used a 4lb rack of pork and put it in a brine for 12 hours. He then made a rub and grilled it. He also made a barbecue sauce. I altered this. I used a 2lb pork tenderloin, omitted the brining part of the prep, adjusted the rub, and baked it in the oven after a sear. I did make the barbecue sauce though!

When I made this pork last week we got to take advantage of the cast iron skillet – which saved us one dirty dish – woohoo! I also no longer had fennel seeds, but they weren’t missed.

Corn on the cob makes a perfect side to accompany this pork when it’s in season. As do sweet potato fries. And of course, some Whiskey Bacon Baked Beans!

Note: If you don’t have a cast iron skillet or another oven save skillet simply transfer the pork loin to a lightly greased casserole dish. 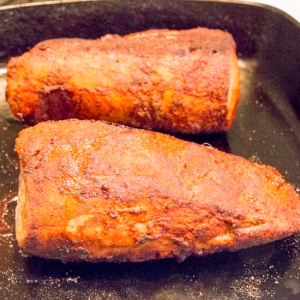