Pork tenderloin is my favorite cut of meat. And cooking it in the slow cooker ensures a tender, juicy outcome every time.

The liquid you cook the pork in also becomes a great almost-gravy to pour over top the pork. If you want it to be thicker simply reduce it over the stove.

I tried slicing the pork so that I could pour the sauce over top and take a mouthwatering photograph. But Stuart decided that I was slicing the pork incorrectly and grabbed the knife out of my hand. He said I shouldn’t cut straight down, I should be cutting at an angle. Well, his attempt to cut at an angle failed completely. The pork was so tender that is simply shredded!

Time-saving Tip: Combine your liquid ingredients the night before and store in the fridge. That way all you have to do while you’re still half-asleep is whisk and pour atop the pork in the slow cooker!

*This recipe is adapted from Jenn @ http://www.thespicekitrecipes.com/crock-pot-pork-roast/* 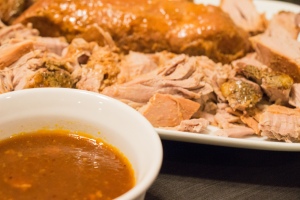