The New Year brings with it resolutions for self-improvement, hope and dreams, and a fresh start. But it is also that time of year where colds are being spread amongst family and friends. (That must be why January is National Soup Month.)

If you find your body rebelling against returning to work and post-vacation responsibilities, this slow cooker soup might be just what you need! Curl up on the couch with some warm tea, a good book, and a bowl of chicken noodle soup.

*This recipe is adapted from Diana at http://southernfood.about.com/od/crockpotsoup/r/bl43c14.htm* 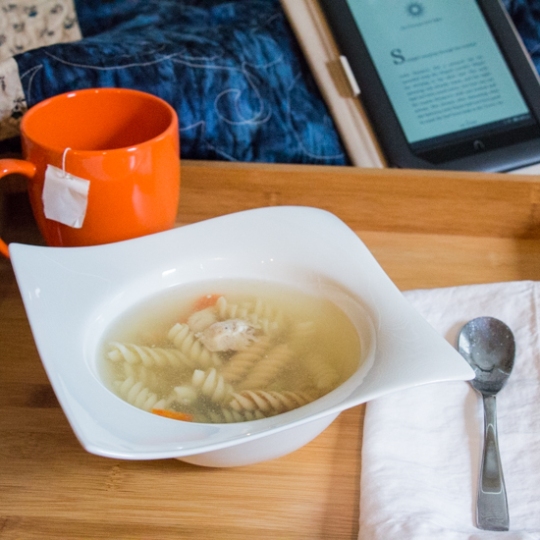 Now that the weather is getting cooler I thought it’s time for another soup recipe. And this Chicken Tortilla Soup fits in nicely with Mexican Monday!

I made the chicken stock on Sunday so that my weeknight prep time would be shorter. If you want to shred your chicken instead of cubing it, it’s best to do while it’s hot out of the poaching liquid. Because I cooked the chicken/stock the night before I simply cubed it before adding it to the soup Monday evening. Even though my prep time was much shorter, the soup cook time was longer than the original recipe declared, I left the soup on the stove for about an hour and a half. But with soup, the longer it stews the better!

I also left the heat factor out of the soup because I was making this for childhood taste buds. I provided hot sauce on the table for the adults to flavor our soups.

*This recipe is modified from Patricia at http://www.patriciaspatticakes.com/2013/10/spicy-chicken-tortilla-soup.html*

While in Hawaii Stuart had the idea for me to recreate the foods we ate for my blog. Our favorite meal of the trip was at a little French restaurant in downtown Hilo. I haven’t attempted making crepes yet, but I do know how to make French Onion Soup.

I made this recipe back in 2011 after finding it on Kelsey’s Essentials on Cooking Channel. I altered the recipe slightly this go-around to utilize Slow Cooker Caramelized Onions, adjusted the liquid amounts for a desired consistency, and added more cheese.

My first truly culinary post is in honor of the woman who introduced me to the kitchen, my Busia. (Busia, pronounced boo-sha, is the Americanized Polish word for grandmother.) Busia didn’t teach me how to cook in the ways you might traditionally think of a grandmother teaching her granddaughter, but she did welcome me into her kitchen and let me be her sous chef – peeling carrots and potatoes and chopping veggies. And even still, my favorite part of making dinner is all the prep work! It might be the engineer in me though too – I love trying to keep everything the same size while I’m chopping.

If I had to choose just one recipe that makes me think of my grandmother, it’s her cheese soup. There are potatoes and carrots that need to be peeled and chopped along with celery. I don’t recall ever chopping the onion when I was younger, but it’s one of my favorite foods to dice now that I’ve learned the proper technique from watching countless hours of Food Network.

To me, the most comforting smell in the kitchen is the smell of onions sautéing in butter! And I think this recipe is the reason why.

While I was preparing the soup yesterday afternoon, the smells of Busia’s kitchen came into mine and I knew she was looking down on me, making sure the milk wouldn’t curdle when I added it to the roux and didn’t burn on the bottom of the pot.

I think it’s true when they say the secret ingredient is love, because it turned out perfectly. 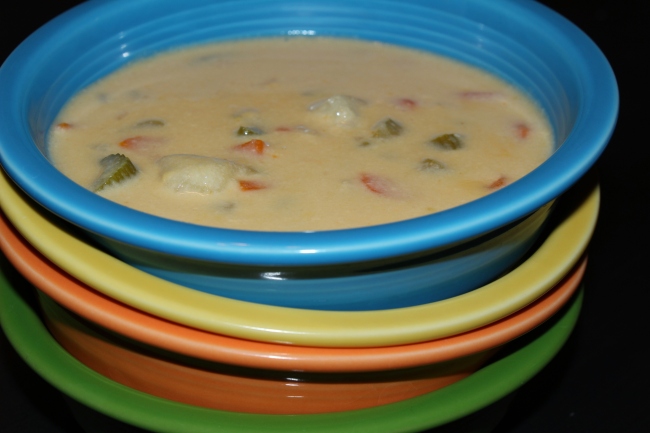