April is here and with it another Foodie Extravaganza! This month Camilla from Culinary Adventures with Camilla told us to make some enchiladas.

It has been 13 months since I’ve participated with this group but I couldn’t turn down enchiladas! I mean, how could I!? My husband and I had a fun culinary routine of Mexican Mondays which held strong for at least 5 years. And to this day, when I do put Mexican cuisine on our weekly menu, I let it fall on a Monday. Mexican Monday allows way more versatility than Taco Tuesday.

My Honey Lime Chicken Enchiladas are a family favorite, and my go-to dish for bringing to friends after having a baby or a deployment. I had to come up with something different for today’s post and somehow my mind wandered to one of our favorite Mexican places in Ohio, Abuelo’s. We didn’t realize it at the time, but Abuelo’s is evidently a chain restaurant, but we still liked it! My favorite dish were their Spinach Enchiladas, so that’s what I have for you today. My husband couldn’t stop raving about them and has declared them a strong competitor to the previously mentioned Honey Lime Chicken Enchiladas.

Be sure to check out these other creative enchilada recipes:

If you are a blogger and would like to join our group and blog along with us, come join our Facebook page Foodie Extravaganza. We would love to have you! If you’re a spectator looking for delicious tid-bits check out our Foodie Extravaganza Pinterest Board! Looking for our previous parties? Check them out HERE.

I know it’s a little “late” to be sharing a slew of Mexican recipes but rarely does anyone ever eat Mexican food ONLY on Cinco de Mayo! Besides, it’s Mexican Monday!

On May 5th my friends and I had a Cinco de Mayo potluck. As can be expected, our fiesta theme brought everyone out of the wood-works and we had a great turnout and more importantly amazing food!

The day before the party my friend came over to help me make these Papel Picado Banners to put on the bar below the food. I think it really added some holiday flair to the place. And it was fun to be crafting something. Thankfully both of our babies napped at the same time and we were able to tackle this project quickly.

Here are most of the recipes from the night: 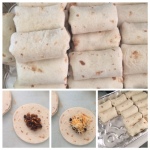 I brought my baby baked beef burritos to the party, which ended up being a perfect potluck food. I doubled the recipe, accidentally quadrupling the amount of black beans, to yield 33 burritos. (I left 3 of them for Stuart) I was able to make the beef mixture while the little man was taking a nap and while he was playing happily at my feet with the tupperware cabinet I rolled up the burritos. I then baked them in two batches (because my oven is small) right before leaving the house. I put foil between each layer of burritos to keep them warm. (I felt like a caterer!) 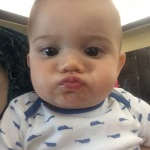 Stuart had to stay at work late that night so I brought my son to the party until he could be picked up. I let him try all of the food off my plate and he ended up eating the filling of three burritos! (I took 8 of them home with me when the party was over and we both enjoyed them for lunch the next day, too.)

Next month we’ll celebrate summer with a BBQ themed potluck!

For Cinco de Mayo, which conveniently falls on a Monday, I wanted to do something traditional. If you’re a returning reader to Sew You Think You Can Cook you know that almost every Monday I feature a Mexican-inspired recipe for Mexican Mondays. How authentic my recipes are is very debatable, and I don’t pretend that they are. Most of what I make spins from the American version of Mexican cuisine. But for Cinco de Mayo I thought I’d pay tribute to the holiday.

Cinco de Mayo commemorates the Battle of Puebla when the Mexican army defeated the French in 1862. Puebla is considered the melting pot of Mexico – Spanish, French, and the Oriental flavors were given to native Aztec and Mayan foods. While Puebla is known for it’s Mole Poblano I planned to prepare Chiles en Nogada (stuffed chiles in a walnut cream sauce), even it it’s not typically served until the fall when walnuts and pomegranates are in season.

Note I said planned to prepare?

Life got in the way. Weekends were spent out of town and Stuart was on travel (I wasn’t about to spend so much time and effort on a dish just for me). So my Plan B was to create a sweet traditionally found in Puebla – Jamoncillo Pinion.  The [translated] recipe looked simple enough. And then I was placed on bed rest. My mom generously offered to give it a shot. Somewhere along the way we failed at candy making. Whether something was lost in the translation or we were simply too impatient I’m not sure. But the candy never set – even after putting it in the freezer overnight. (Before I get in trouble, I am in no way blaming her! I’d be posting the same story if I were the one standing at the stove.)

So now what? I can’t NOT have a post on Cinco de Mayo!

With Cinco de Mayo being widely popular in the states and salsa being the number one condiment in America, why not a simple salsa?

*This recipe is adapted from Kelley at http://www.mountainmamacooks.com/2012/01/quick-and-easy-blender-salsa/* 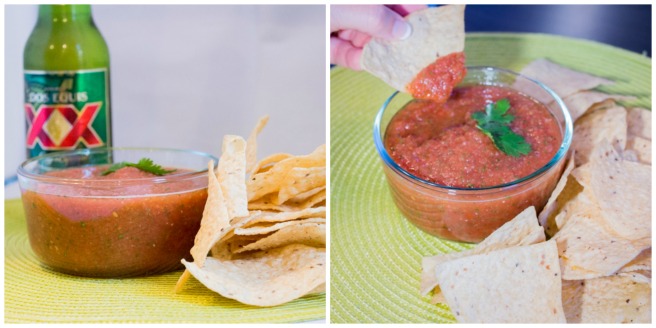 Stuart has now put a ban on all grocery store salsas and demands this be made every time instead.

With it still being my blog’s first year I’ve never been able to do a Recipe Round Up for a holiday before. But thanks to my Mexican Mondays I have plenty of suggestions for your Cinco de Mayo celebration!

And my most popular Mexican Monday recipe: Healthy Chicken Tacos