I thought it would be fun to check out the three different colored sands on the Big Island – black, white, and green. South Point, in the district of Ka’u, is the home to one of only four green sand beaches in the world. I wish I could tell you that the olivine sand is stunning, but regrettingly I cannot.

To get to the green sand beach you must drive ten miles down South Point Road. At this point you can continue to go straight a couple hundred yards and stand in the southern most point of the United States or you can go left for a mile to park for the green sands beach Papakolea.

Once you park your vehicle it’s a 2.5 mile hike to hit the green sands. If you decide to take this trek, don’t do it in flip flops, and have water with you. Even though we had a beach day planned, we were still prepared with hiking boots in the car. The walk is windy but beautiful. The color of the water is unrealistically turquoise and the power of the waves stunning. So the trip wasn’t a complete loss. Note: These photographs have not been edited or changed.

Our day to the southern tip of Hawaii was the day of my birthday. And I’m going to admit off the bat that I was a big birthday baby. I had really wanted to sit by the hotel pool and have a couple daiquiris, but at the same time I didn’t want to waste a day either! So we decided that we’d come back to Kailua-Kona before dark; which actually put me back into my rush rush rush mentality. But on the way to the car from breakfast we found sea turtles Seth and Sandy! (previous post) An hour and a half later we finally hit the road.

About a mile into the walk to the green sand beach I’d called it quits. There was another beach I’d wanted to see that was known for sea turtle spottings and still wanted to get back before sunset. The sand we’d been trekking through was a greenish-yellow, if that counts?

At Punalu’u I was relieved to see a turtle feeding in the rocks and laying on the beach and another laying on the beach. This sand was the blackest of the previous two black sand beaches we’d seen on the trip. It was what Stuart pictured in his mind.

After the beach and after coming to terms with missing sunset in Kailua-Kona, we decided to stop at the Southernmost restaurant in the US, Hana Hou, in Na’alehu. It was here that we tried the Hawaiian fast food Loco Moco. Traditionally Loco Moco is white rice, brown gravy, hamburger patty, two over easy eggs. There are variations that change out the meat choice. Our waitress said that their best was with shredded pork. Stuart and I shared a large plate of it, and still couldn’t finish it – serving sizes in Hawaii are huge! I wasn’t completely convinced by the ingredient list, and it’s not the most beautiful of dishes, but let me tell you – it’s surprisingly delicious, and comforting.

The day may not have gone as I’d planned, but a “bad” day in Hawaii is never a bad day. And a day seeing sea turtles is a good day. The sea turtle, or honu, is a symbol of longevity and is the guardian of family. 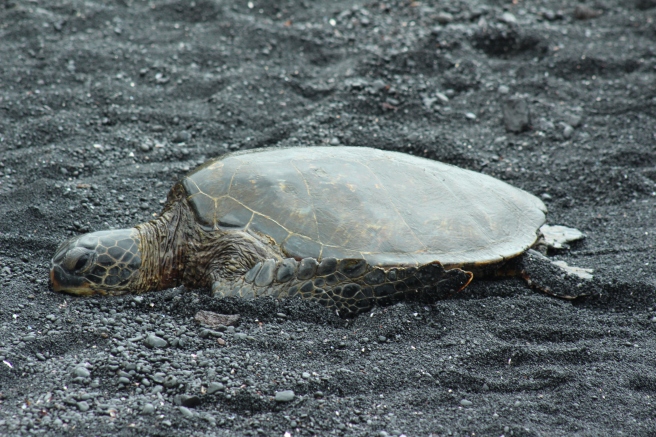