They say you’re not a true cook until you’ve owned (or at least cooked in) a cast iron skillet. I don’t know who “they” are, but I do know why “they” love the cast iron. Cast iron provides the most even cooking temperature, it’s oven safe, and the more you use it the better your food tastes.

I’ve always dreamed of using a cast iron skillet. I’ve even gotten really close to buying my own – but I chicken out at the price. I’ve seen many recipes that require or heavily suggest the use of a cast iron skillet. I always save these recipes but they’re filed under the “yeah-right-that’ll-never-happen” category. (Like ice cream maker recipes, until my husband gave me an ice cream maker for Christmas!)

Naturally the first thing I use it for is Mexican Monday!

This tortilla pie tastes better than it looks (now that the sun goes down at 5:30 it’s impossible to get good food photography). If you want to see photos that do this pie justice check out the original recipe. There are a lot of steps but they can easily be done in advance. And let me tell you, it’s completely worth it. This tortilla pie takes the flavors of enchiladas, combines it with the volume of a burrito, and assembles it in pie form. Crispy on the top and creamy on the inside.

The size tortillas you use will depend on the size of your skillet. Because my skillet is a square, my tortillas were smaller than the original, therefore I used less of the filling. What was left of the filling ingredients created a perfect burrito that Stuart took to work for lunch.

*This recipe is adapted from Anita at http://www.hungrycouplenyc.com/2014/06/mexican-tortilla-pie.html * 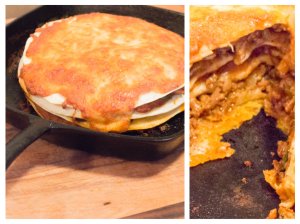